And That's A Good Thing!

Men Are Pigs is a guide for men and women who want more sex, more passion, and more success in dating and marriage. Based on hundreds of in-depth interviews with men and women of all ages, Pigs reveals the secrets to hotter sex and deeper relationships. 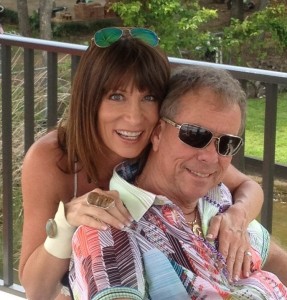 Ron and his “twenty percenter” girlfriend of 6 years

Ron Sturgeon is the sex whisperer. His insight into both the male and female mind makes him the ideal sexpert to consult about sex and relationships.

Fans of Nicholas Evans’ novel The Horse Whisperer know what it means to be a whisperer. It means knowing something so well that you can anticipate the moves to make to be successful.

As a young man, Ron owned and operated a VW bug repair shop. He could listen to an engine and know what was wrong. As he developed multi-million dollar auto-related businesses, he became an expert at listening and understanding the moves to make to earn steady profits.

Suddenly single at mid-life, Ron had to turn his considerable talents to the dating game. He took a scientific approach and began to interview friends and acquaintances who were lucky in love and marriage. By listening to them, he became the Sex Whisperer.

What the Sex Whisperer Learned

His many interviews confirmed that there are key differences in how men and women think about sex. Men are wired to want it all the time.

Some women condemn men as pigs for following their natural inclinations. Not Ron. As the sex whisperer, he invites men to embrace alpha maleness and to focus on finding women with out-sized sex drives.

The Sex Whisperer learned that there are surprising number of women (approximately one in five) who think about sex in the same way that men do.

Of course, the guys lucky enough to be hooked up with one of these naughty girls are getting busy much more  often than the average guy.

The Sex Whisperer Will Teach You

Bust out of being Mr. Once a week and start getting it like a rock star! Ron became the sex whisper by asking a simple question of the men who had encountered and been loved by these red-hot hotties.

He asked what made that girl different from all the others.  If you’re single and like mind blowing sex, isn’t that the Holy Grail? Wouldn’t you like to know how to spot the extra naughty girl and get her to go home with you?

The men Ron interviewed had fond memories of these girls who were sexually adventurous and loved pleasing their man and being pleased by him.

“You’ve probably had a girlfriend who was a little naughtier than the rest and loved to curl your toes,” says Sex Expert Ron.  “Wouldn’t you like to have a few more like her?”